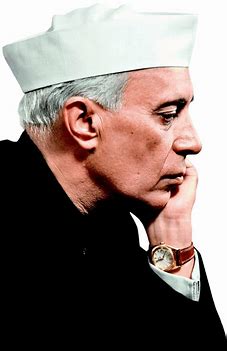 Remembering Pandit Jawaharlal Nehru on his birthday. It might be a good time to look at our education system, parenting system etc. Its commitment the children that we celebrate today.

Since this morning the few forums that I’m part of are sending ‘Happy Children’s Day’ message. Someone actually had an esoteric interpretation of the same.

There are posts on 10 children’s Hindi movie songs.

Then there are posts like Agatha Christie’s Mrs.McGinity is dead… where are these kids now images of kids from various Hindi movies who are now forgotten entities. Another list of before and now of successful child artists. From Neetu Singh to her proposed daughter-in-law Alia Bhatt.

There was also one ‘intellectual’ who recommended that Children’s Day was about finding and celebrating the child within.

While growing up Nov.14th was about remembering the first Prime Minister of India, Pandit Jawaharlal Nehru… The man who lead the country for 17yrs.  He was no doubt a WOG (western oriental gentleman) like the elite of his time, but he was a prolific writer and orator. He had vision that suited us to shift from a colony to a republic.

Born on Nov.14th November 1889 to Motilal Nehru and Swaroop Rani. He grew up in Allahabad studied in Trinity college Cambridge, returned to Allahabad and practiced law, neither the practice of the company of Lawyers interested him. He was drawn to politics. Motilal being a shrewd man, saw the power shift in India. He converted his son ‘Joe Nehru” to ‘Jawahar’ and the young man who was inclined to nationalistic movement was navigated to the forefront.

Jawaharlal Nehru was very fond of children and was referred to as chacha Nehru, of course if Gandhi was Bapu, the Jawahar had to be chacha. He had certain beliefs and vision for children. Here quoting him:

1. As they grow up, unfortunately, their natural freedom is often eclipsed by teaching and behavior of elders. At school, they learn many things, which are no doubt useful, but they gradually forget that essential thing to be human and kind, playful and make life richer for ourselves and others.

2. The children of today will make the India of tomorrow. The way we bring them up will determine the future of the country.

3. Children are like buds in a garden and should be carefully and lovingly nurtured, as they are the future of the nation and the citizens of tomorrow. Only through right education can a better order of society be built up.

4.The vast army of children across the world, outwardly different kinds of clothes, and yet so very like another. If you bring them together, they play or quarrel, but even their quarrel is some kind of play. They do not think of differences amongst themselves, the difference between class or caste or color or status. They are wiser than their father(s) or mother(s)

5. Failure comes only when we forget our ideals and objectives and principles.

6. The only way to reform them (children) is to win them over with love. So long as a child is unfriendly, you can’t mend his ways. He can be disciplined, if his attention is drawn to some other activity, like a voluntary body in Delhi (1960s) “Bal Sahyog” used to do. They learn many things there during vocations, without any compulsion of sort and then their minds get diverted to constructive channels.”

6. The object of education was to produce a desire to serve the community as a whole and to apply the Knowledge gained not only for personal but for public welfare.

7. Children do not think of differences amongst themselves.

8. What we really are matters more than what other people think of us.

9. There is perhaps nothing so bad and so dangerous in life as fear. Life is like a game of cards.

10. It seldom goes to the timid who are ever afraid of the consequences.

I really wonder how relevant it is to send a “happy children’s day card” or spoke about, “child within” Maybe it is time we thanked Pandit Jawaharlal Nehru for his contribution and gave a serious thought to the things he had to share.