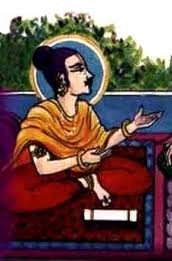 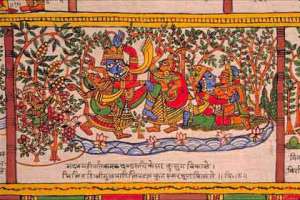 Vasanta spring, the eternal companion of the Kamadev, the lord of love, adorned with flowers and clothed in green, the poem by Jayadeva

When winsome westerly winds
caress comely creeping cloves
As bumblebees’ buzz-buzzing and cuckoos’ coo-cooing
resound in huts, in coves, in groves,
In springtime, the sensual season so languorous
long for forlorn lovers,
Krishna strays and plays, my friend,
dancing with young girls.
The poem by the Sanskrit poet Jayadeva, describes Krishna in spring. Spring the king of all seasons, the companion of the God of Love.
Between 20th of March and 22nd of March is the Vernal equinox the official first day of spring. Spring is the nature’s way of saying “lets party!” 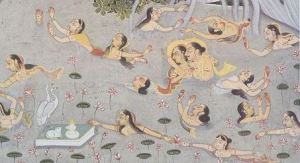 Grishma.–The  summerr? The summer sounds
actually one does not really pay much attention to it. Its only when the poets highlight it that we notice it.
to the kids it means no more pencils no more books, no more teachers dirty looks. To mothers it means no lunch boxes to pack, to Indian grandparents it means grandkids home.
To mother nature—sings a different song, there is an unreal element here like a mirage, the heat saps the enmity between predators, you don’t need wealth to cool your life-like the famous Indian poet Bhana says, the season allows it by itself by sending the breeze through the sweat which is coolant.
The Indian summer is legendary, the cracking of dawn is with the chirping of migratory birds, and then come the crackling parrots, on tree tops, these slowly leave the stage for droning bees that come to the jasmine flowers as they are at the peak of their fragrance. As the day moves on it’s a mirage of peace and harmony between predators created by the lethargy of the summer heat.  Every minute activity seems so exhausting, sanguinity is the only possible reaction to life. 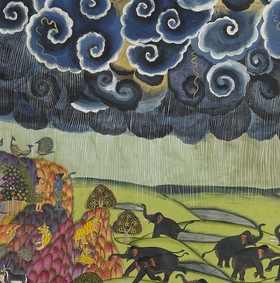 The heat breaks, with Varsha the rains. As a dancer for me movements of nature are most inspiring. The swaying trees, the changing tempo and rhythm with the intensity of the breeze. Varsha heralds the season of shared blankets and warm coffee. The thunder heralds the duel between the sea and wind to win the green donned maiden earth.

The rhythm of the thunder the flash of the lightning music of the storm evokes a dance in the soul.

Sharada— Rains tumult of rains has given way to stillness. The rivers are meandering and the skies are clear. It is the season of beauty, of bright sun, lustrous moon, glowing blue sky, gentle flowing rivers and clear water. Lakes, that are rich in white and blue lotuses, the lazy swans floating just after a long flight from the Himalayas. Trees

Apāmuddhṛtānāṃnijamupadiśantyāsthitipadaṃare full, of flowers and fruits, hence the season to thank Lakshmi the mother of abundance, Kubera the divine treasurer, to honour Narakasura the symbolic representation of debris and decay.

Guiding the swollen waters back within their normal bounds, bowing low the rice loaded with grain, drawing out the peacock’s drunken desire as if it were a terrible poison – see, autumn is taming the wide world. 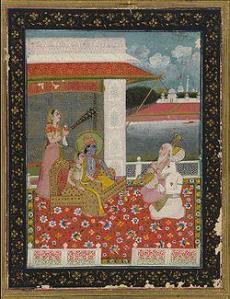 Winter or Hemanta as we call it Sanskrit is a favourite of mine. The description of this is done by a Sanskrit poet as follows:

The winter wind, lord of water drops, freezing even rivers deep as the mightiest of elephants is tall, produces a stream of hot, painful tears from the eyes of women whose husbands are away.

I love winter when the landscape weaves its magic. It is like a mystery waiting to be unveiled. The story has its nebulous secret. There is there solitude, there is loneliness. There is a sense of privacy which no other season gives. Spring, summer or fall people sort of buzz around. While in the monsoon the drone of nature may take getting used to, it is the winter that provides quiet stretches for one to savour the sense of belonging to one’s own self.

Keeping warm, is a luxury in itself. Winter being milder in my part of the world, we tend to wear thick cottons or thin woollens. Silks are the norm for daily dressing.

The festivals involve dishes made of Til ~also known as gingelly that is sesame. Roasted sesame is dropped into melted or caramelized jaggery to which ginger, cardamom and cashew bits have been added. This is rolled into small balls. Til is supposed to be a keep warm nutrient that helps one tide over the winter scarcity. 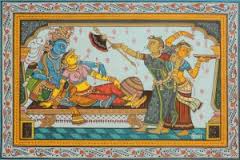 Shishira —the fall, the season of diminishing winter, shishra in Sanskrit poetry usually include bedroom scenes and many times morning after descriptions. The external world is not interplay to depict the interpersonal erotica. Sometimes there is no reference to externals except may be referring to body warmth of the partners. It converts the bitter cold into stimulus for body contact. It is so specific that it is called as shishira sukha or pleasures of shishira.

Ruffling their hair, making them close their eyes, violently snatching their clothes away, giving them goose bumps, making their limbs tremble with excitement and eliciting from them again and again loud gasps that chap their lips – this śiśira wind now seems to be these women’s lover.

In today’s world office jobs and supermarkets have made it possible to provide for ourselves and our families regardless of nature’s cycles. While most of us no longer depend directly on nature’s seasons for our livelihood our body’s clocks still know deep down that a change of season means a change in us too. If we don’t acknowledge this we may feel out of sync, as though we have lost our natural rhythm. These days, autumn is more likely to bring thoughts of going back to school than harvesting but into classes the chill in the air tells us it is time to move inside and prepare for the future. We can consciously celebrate the change of season and shift our energy by setting time aside to make the same change we see in nature. We change our colours like falling leaves and wilting blooms by putting away our bright summer colours and filling our wardrobes and living areas with warm gold’s, reds and browns,

While plants concentrate energy deep in their roots and seeds we can retreat to quieter indoor pursuits, nurturing seeds of endeavors, which need quiet concentration to grow. We can stoke our inner fires with our favourite coffee, eat, cider or cocoas while savoring rich hot comfort foods that the season brings on array of fall colors, potatoes, pumpkins, corn etc. as animals begin growing their winter coats and repairing their dens for hibernation we dust of our favorite sweaters and jackets and bring blankets out of storage creating coziness with throw rugs and heavier drapes. We can also light candles or fireplaces to b ring remnant of summer’s fiery glow indoors.

By making a conscious celebration of change we usher in the new season in a way that allow us to go with the flow, not fight against it. We sync ourselves up with the rhythm of nature and the universe and let it carry us forward nurturing us as we prepare for our future.

We have our favourite seasons, we have our likes, our dislikes, yet season is a muse for creative energy. like Julian Barnes says in Flaubert’s parrot, “When you’re young you prefer the vulgar months, the fullness of the season, as you grow older you learn to like the in-between months, that can’t make up their minds, perhaps it’s a  way of admitting that things can’t ever bear the same certainty again.. ”