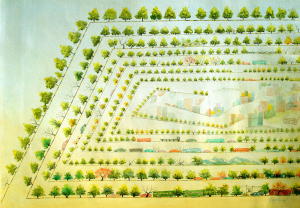 Among the many plays Bhikari Thakur wrote,  ‘Putrabadh’  or ‘Murder of a Son’  and ‘Bidesiya’ or ‘Foreigner’ act as epics that help deal with the dilemma of migration. One might find fault in the cultivation of the two cash crops – indigo and poppy that resulted in the recurring famines during the colonial rule in the  19th century, as the cause of  indentureship or the migration of people from Bhojpur, Awadh, Mithila and Magadh – regions in the Gangetic Plains of Eastern India.  But the migration arose from an infrastructure of exploitation that resulted in a culture which had been decimated during the first war of independence in 1857. A fine plan of alienation was put in place much before by the ‘Permanent Settlement’  of 1793,  a law that conferred permanent rights to feudal lords over their lands,  erasing the rights of the peasants to the land they tilled.  In about four decades young men began being indentured to British, French and Dutch colonies in South America,  Africa and the Pacific.  These were men who had been driven to disillusionment by the poverty that came with receding land rights and the right to sow crops that would relive their hunger.  They were to replace the slaves traded from Africa for Sugarcane plantations,  only to enter a pact of xenophobia between themselves and the freed slaves, a fact that dominates the politics of Trinidad,  Suriname,  Guyana,  Mauritius and Fiji. Shambhavi Singh an artist from Bihar began to deal with an uncertain camaraderie of culture while studying in Amsterdam and encountering the Hindoestanen of Suriname.  She began to gather sickles,  sickles used to cut the stems of the sugarcane in her native Bihar and by the Bihari Diaspora in Latin America and the Caribbean.  But she gathers these sickles in sculptural formations  not as monuments to the Maoist insurgency that channels the discontent in Bihar but as the ‘Hasua’ a ceremonial sickle now less used in Bihari weddings, brought along with a plough to the home of the bride by the barber of the family.

Bhikari Thakur himself was a barber, a barber was seen close to his patron, as  he heard them narrate stories and happenings as they shaved their beards.  These were intimate accounts to which he was sworn to secrecy.  This intimacy appears as forewarnings in the plays of Thakur. Men stayed away from their wives for years while working in Calcutta,  it was only natural for them to visit prostitutes or their wives to finds affections in the arms of other men in the village.  Illegitimacy and marital dispute began to plague the villages of Arrah and Chapra.  Bhikari in Bidesiya urges the wayward man to return home using songs and humour soothing the hurt,  in Putrabadh he critiques the banality of inquiring about the legitimacy of a child.  Bhikari instead critiques the reasons behind the migration.  Scenes of an Indian city are projected in a Barbers Box, by Naresh Kumar, as he builds the maps of Bihar,  India and the World using rusting razor blades,  to narrate the complex nature of geography that now defines the Bihari identity.

Four decades after Bhikari’s death, Naresh Kumar is among the large Bihari diaspora that inhabits Delhi,  and the Biharis are the dominant migrant group across cities in India.  Biharis also live as undocumented people in Burma,  Bangladesh and Pakistan remnants of the many partitions the subcontinent has seen.  The newly independent government of federal India and in state of Bihar were staffed by anglicised Bihari feudal lords who felt much comfortable reading literature in English Universities,  these men perpetuated the disaffection of the majority who were illiterate and unable to meet the needs of their stomach.  Mahmood Farooqi of the Urdu Story Telling group ‘Dastaangoi’  narrates how every fort,  library, and sarai in the United Provinces and Bihar were burnt to ground by the victorious British after the first war of independence in 1857.   This destruction and subjugation led to a certain erasure of culture but also created a new sense of cohesion.  This cohesion was built on caste and religion. Castes began to group together, people were suspicious of their neighbours even though they spent their lives with them rather than with their caste fellows.  Agents used such deep caste ties to mislead young men into signing contracts for indentureship.  The sons of feudal lords acquired power and used similar caste based alliances to garner political contracts.  The ‘takheydar’ or the contractor became the source of patronage, soon he began to establish his presence through crime,  only to be reaped as dividends when in politics.  This mis-governance and precarious land rights forced many to flee Bihar as economic migrants to Bombay.  Naresh Kumar was though fleeing the inability of a city – Patna, to imbibe a certain metropolitan ethos.  As an artist he found an audience enthralled by its poverty,  as a lover he found a society that had disowned him.

Bireswar Bhattacharjee a retired professor form the Patna College of Art & Craft, advised Naresh Kumar as he had done to many others before to leave Patna and travel out for exposure.  Bhattacharjee himself had come to Patna as a young man a refugee from present day Bangladesh in 1950.  A government scholarship for year took him to Istanbul,  from there he travelled to Europe coming to Italy and Paris, where he came across the works of Marino Marini, Marcel Duchamp and the performative practices of the many Fluxus Group & Arte Povera artists.  He returned to Patna in 1969,  to curate with Shyam Sharma a series of performances,  light projections along with the students of the Fine Art College.  He scripted these performances in order to research a new vocabulary of movement with which they could address their discontent and object to the callousness of the state.  Neo-Dyanamisms happened at a time when Jayaprakash Narayan’s ‘Purna Swaraj’  or Total Revolution movement was in its infant years. The movement failed though its successors took power and still rule in Bihar. But this Bihar is now xenophobic, people chided the decision to award Bhattacharjee Bihar’s first artist recognition, the criticism came from artists who themselves live as immigrants outisde, they considered him a Bengali. Since long Bhattacharjee says he lives in exile  in Calcutta in disgust with the happenings of contemporary Bihar.

A script, documentation and recordings from the Neo-Dyanamisms project were made collated and handed over to the library of the NGMA in Delhi, from where it has been misplaced, only to remain in the memory of those who engaged and participated.  Last month Naresh Kumar participated in a workshop in Patna,  where he counted the names of those who left his village never to return, in search of jobs – only returning later in coffins. Phanishwarnath Renu,  a poet from Kumar’s region reflects on a similar dismay in his novel ‘Maila Anchal’ or ‘Soiled Region’. Kumar confronts those who treat his lot with xenophobia by counting the stations he passed in an unreserved wagon with other migrants from his village Sitamarhi to Bombay.  He shares his loss of historical disaffection of the state towards his people,  an experience shared by the cotton farmers of Nashik and Vidarbha.

Naresh Kumar graduated in painting from the Patna College of Arts and Crafts in 2008, presently he is based in Delhi, with a practice in performance, sculpture and painting. He is informed by the Maithili poet Baba Nagarjun on aesthetics and politics.

Clark House Initiative is a curatorial collaborative and a union of artists based in Bombay.

Bombay 400039. Opposite Sahakari Bhandar and Regal Cinema, next to Woodside Inn.