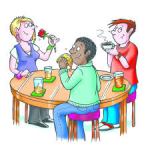 Aer –Godrej…
A lingering fragrance for 45 days.
But a good fragrance is really a powerful cocktail of memories and emotions.

There is a fragrance in the air that triggers a certain memory like a passage of a song, an old photograph falling out from the pages of a book the sound of somebody’s voice in the hall that makes your heart leap and fills your eyes with tears.
As people move out houses and spaces, the house smells must and damp, and little sweet, as if it were haunted by ghosts of long-dead cookies.
,
Sometimes I feel that a crowd of people must be like the dish we cook up, a pod of garlic, a stick of clove, a pinch of cinnamon each with it its aroma, blend and the final dish smells something different.

An average crowd fragrance in a tourist bus or the a.c. compartment of a train would be like an obscene phone call from nature. The air moist sultry, secretive and far from fresh – as it were being exhaled into one’s face. Sometimes it even sounds like heavy breathing. The air within the vehicle seems to acquire a tinge of metallic halitosis due to fumes expelled, shall I say stale food, some kind of beer, and travel fatigue.

What fragrance would I choose to replace this? Well with a get well phone call from Mother Nature/ of course. The truth is I would want a beautiful smell, as I sniff the scent and see with mind’s eye the vision it brings to my heart should be reassuring, healing and hopeful. If you think I am talking about a blend of honeysuckle, swamp flowers, magnolia and the mystery scent of the river scented atmosphere then you are you mistaken, it would only amplify the organic sleaze,

Like I said before the crowd fragrance is unique to the crowd that creates it’s, so should the fragrance that it wears to mask itself. True artistry in perfumery is the marriage of notes that may juxtapose each other but become harmonious in a blend. Born of pure creativity and an astounding knowledge of literally thousands of synthetics and hundreds of essential oils, they must possess the ability to marry disparate and conjugal notes to a harmonious blend.
Imagine a mixing the fragrance of a certain day, the heavy musk of the hillside after the rain with the lightness of fresh blossoms doused in down pour, each little bottle as the essence of a happy day or a sad one,

A scent of a lonely moment-sandalwood and bergamot lingering over a rich peppery base. Aphrodisiac and repressive, soft and violent at the same time!!

So much for perfumes of Arabia I mean perfumery, but when all that wrapping is taken off, what I would really like Godrej-Aer is a fragrance that would absorb other strong fragrances and leave behind a clear odourless air, which would not initiate peristalsis (puking) and this does not the demand of an evocative travel experience but more from an abusive travel experience.
Travelling from Goa to Bombay, during the rains, the air retains its dampness, and interiors of the bus is already musty, the winding uphill terrain rendering us susceptible to the queasy stomach’s that threatens to throw up.
To this add, wafts of Jackfruit aroma emitted by the fellow travels, munching on it, the sliced mango and chicken sandwich. The bus being air conditioned, the windows don’t open, and there could not be a torture greater than this.
Thank you for creating this fragrance on my request.
http://www.godrejaer.com/