sometimes we tend to adapt things that we have been brainwashed into believing without realizing the impact it has on health, and environment.

Dr.Kumkum Roy has been taking guest lectures at the Goa University and I was attending it, unfortunately I had to use the Ladies room, and the proof that as a nation we have been baptized to using sanitary towels just pops out.

Sanitary towels a category of waste that makes us queasy, we do not want to talk about it.

Let’s not map the journey of the girl child from diapers – to sanitary towels – adult diapers and cohabitation with carcinogenic. For the moment I am talking only about dealing with the disposal of these biomedical hazards.

The entire callousness that we dispose these things are appalling, women both rural and urban handle this rather thoughtlessly, either flushing it down the toilet, or wrapping in plastic or paper and throwing it along with the domestic garbage. Some even throw them into water bodies. An average woman throws about 150kgs of sanitary waste every year and this is mostly non-biodegradable.

Dealing with the disposed pads is an issue, as Ms. Swati singh Sambyal a senior research associate at the centre of science and environment, says the major issue is categorization, what does one call it, biomedical waste or plastic waste?  Biomedical waste has to be incinerated, autoclaved or microwaved to destroy pathogens.

Cotton, super absorbent polymer, a whole lot of plastic, blood, sometimes faeces, these are dangerous for any corporation to deal with. To expect garbage collectors to handle them is kind of inhumane.

The trend continues with the feminine hygiene products, as of now 12% of the population of menstruating women in India can afford disposable sanitary napkins, but on a conservative estimate the these women contribute about 21.3 billion sanitary napkins to a landfill in their life time.

Wood pulp is used in disposable diapers both adult and children and sanitary napkins, chlorine bleach is another key ingredient; this is both a environment hazard and health hazard as it releases toxic chemicals as by-products. Toxins dioxin and furan are carcinogenic while others cause pollution to the soil and water.

Once the garbage collector collects the napkins, as household waste the segregation occurs manually. That is waste pickers separate out soiled napkins from recyclables by hands, this exposes them to micro-organisms like E.Coli, Salmonella, Staphylococcus, HIV and pathogens that cause hepatitis and tetanus. These are then driven out of the city and burned in a landfill sometimes they are shredded before being buried. 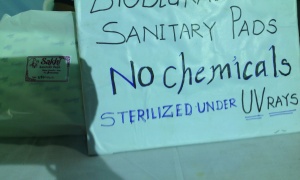 90% of the sanitary napkin is plastic; the dry weave is made of polypropylene a plastic polymer. This both harmful to the body, and the environment. The toxic chemical in the DSN tends to be absorbed by the vaginal and labial walls particularly as the skin in these parts are highly vascular.

When it comes to biodegradable the napkins take about 800 years to degrade, the Indian government has come with incineration as alternate, but WHO recommends sanitary waste should be incinerated in temperatures above 800o , to achieve this is a challenge in India it is also a challenge to monitor the emissions from the incinerators.

While various solutions are being panned out to handle this. one interesting one has come from Sakhi biodegradable pads from Goa. A patient of mine who is known to have vaginal rashes had a rash free cycle, and heavy PCOD bleeding was also contained. Maybe we it is time we looked at indigenous options without being enamoured by multinational names and their westernized models.