September 15th is an interesting day, with Free Money day, and the International day of democracy. Despite it being a Sunday, I am parked at 91 springboard of course with my friends, mulling over brewed coffee. What on earth is actually democracy. Of course my friends Merriam-Webster do refer to it as the govt. Of the people.

There was the emergency in the late seventies when people were scared to voice their thoughts. Post independence and particularly over the last few years anti-intellectualism is a thread that is winding its way through our political and cultural life. nurtured by a notion that my ignorance is as good as your knowledge still worse it is nurturing a thought to think is to be a traitor.

Just have 5 minted conversation with an average voter, it will cure you of any faith in democracy. No one seems to be aware as to what is that they seek in their representative. 2014 election we were told that a large number of population that did not vote turned up to vote hence the sleeping giant has awoken. Does that mean more successful democracy? Does more successful democracy imply that the president or the prime-minister represents more and more closely the inner soul of the people? Isn’t that a scary thought?

It is great for Abraham Lincoln to say elections belong to the people. It’s their decision. If they decide to turn their backs on the fire and burn their behinds, they will have to just sit on their blisters.” It is not so simple.

Elaborate elections are conducted, and of course we turn our backs to the fire and elect the whoever without giving a thought to what is the responsibility we bequeath him/her… the criteria is seems 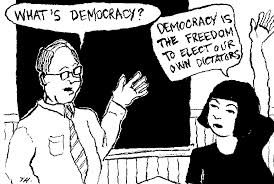 Now what’s the big deal about cribbing about having to sit on the blisters. What is happening to us, is what has happened to whatever democracies that existed in history.  Think of democracy as a warm body democracy in which every adult may vote and all votes count equally. There is no internal feedback for self correction. It depends totally on the wisdom and self-restrain of citizens—this is opposed by folly and lack of self-restrain of other citizens. What is supposed to happen in a democracy is that each sovereign citizen votes in the interest, welfare and safety of all. but the ground reality is each votes his self interest as he or she sees it then it translates to Roti-Kapada-Makhan politics.

This Roti-Kapda-makhan politics is the cancer of democracy it is so fatal that there is no cure. Democracy that worked on equality, suddenly extends franchise to every warm body the body could be a producer or a parasite that marks the beginning of the end of the state. for when the parasitic plebiscite discover that they can vote themselves roti-kapada and makhan without limit and that the productive members cannot stop they will do so until the state bleeds to death.

Absence of healthy opposition we are turning from democracy to mobocracy. If our leaders are the reflection of us, then it is time we had a good look at ourselves. Somewhere along the way OF THE PEOPLE FOR THE PEOPLE BY THE PEOPLE has turned  to Off The People, Fore The People, Buy The People.

The biggest myth of our democracy is that it exists.