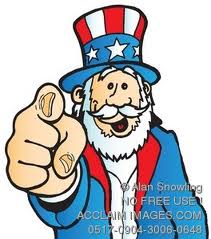 I always found the reference to United States as Uncle sam very handy. Particularly when I have to make my digs at the Bay area Behanji’s or New pastures of the SK-Dabha (the slang my father and his friends had for south Canara Brahmins hostel at Chennai).
This day in 1813 this became an accepted nickname for US. It is believed a meat deliverer called Samuel Wilson shipped meat to the US Army. These boxes were labelled US the soldiers use to refer it as meat from Uncle Sam. This stayed.