In defence of the Bangalore IT-ians.

Well the interviewer sounded like he talked of Delhi elections, anyway not my concern.

Anyway, first and foremost most of these young some things are not Indians, they are American who, happen to be born to parents of Indian genes.  The parents are aware that they are but guardians of future Americans, so they ensure that they get those values right. Those in Bangalore or Delhi are the ones, who were left behind and are awaiting the call from their true land.

Preschool at the age of 2 ½ at a school which is a franchisee of American/Canadian/British educationalist. Never  mind that America follows school zones.

When they start regular school it is again ICSC Cambridge/international public school.

They are scheduled so heavily into abacus, art, music, swimming, skating and god knows what.

Once the kids reach 7th and 8th standard the focus shifts, they have to get into an IIT, or go to Stanford for undergraduate. Newspaper no more deal with local issue, after all we need to think global so we buy TOI which is the pseudonym for Total Overseas Information dealing with relevant information like Angelina Jolie’s latest status, and homosexuality in Hollywood, of course the Indian touch is given by reviews of Karan Johar’s movies.

With this hectic schedule, the kids grow up with splitsville and Simpson’s for entertainment.

Most of these parents educated, the language at home tends to be English, the newspaper that religious occupies the coffee table is English, so  the Indian language ceases to be their mother tongue, Maharashtrians seem to be the only exception to this rule.

When it comes to career option, the criteria is which profession will get them better employability abroad. That is one reason medical and dental come down in the career options.

So how do you expect these kids to have empathy for their roots? The growth is restricted top soil without anchoring.

When they are anchored then you get a Sidddarth Hande who tries to help people follow their own drummer or a Siddaraj Mopkar who gives up a software job to teach in an underprivileged area.

There are young kids in Maharashtra who have not had any of this fancy education, as a matter of fact most of them have not made it 10th standard, but they have revived an ancient water way in their location, and from an acrid non productive land today it has become a hub that sends out onion and jawar to an outside market after domestic needs are met. 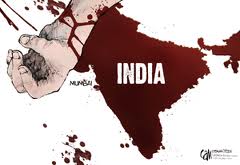 These kids are bothered by the career guidance cell telling them about no future in agriculture, labour issues whatever. They see a need; they address it to create their own opportunity.

What I am essentially saying in majority of the youth today is not allowed to be true Indians, by their upbringing. When we talk about polarization of society that is the polarization vernacular vs. rootless.

It is not that they do not have visions, or goals they do unfortunately they are not part of the Indian identity, because they do not acknowledge their Indian identity until they reach the land of uncle Sam, then they go retrograde.