. The Justice deliverer of the Mogaveeras.

The legends say that Parashurama, the sixth incarnation of Vishnu reclaimed the land from Sagara the Sea God to carve out Parashurama Kshetra.  He got the Brahmins of Aichatra to reside here. He gave them a boon of abundance and got them married to the local fisherwomen. Thus emerged the brahmanical cult of the west coast.  The Brahmins it is believed overate, and could not breathe, that’s when called out,”Rama” when Parashurama arrived he witnessed the greed of the Brahmins, he cursed them saying they would have just enough food to sustain them. The net result being if the rains are good, then the crops near the coast gets washed way. If there rains are insufficient then there is a drought.

All the same, the same when the Kadamba’s conquered Tulunaad, they built temples and brought in Brahmin priests from Ahicchatra to perform the pujas. The immigrants grew homesick and wanted to return to Aicchatra so the king allowed them to marry girls from the Tulu Tribes and settle in the agraharas or Brahmin quarters around the temples. Oral narrations of the Mogaveera community suggest that the descendents of the young Brahmin priests married to the Mogaveera girls acquired lineage and surnames characteristics’ of the native Tulu communities.

Historically Tulunaad was the territory of the Mogaveeras, who followed the Moolasthana system of Tulu lineage. This was the case with all Tuluvas.  The disputes were- settled by the Mahasthree amma, temple at Bennekudru on the banks of river Sita, in the town of Barkuru. By the Mogaveera Kulaguru the high priest, he is known as Mangala Poojarya.

The smaller Gardi’s that are placed around the main temple are various ancestors and nature forces that legends. These are honored for their strenghts and their stories are part of the oral traditions. 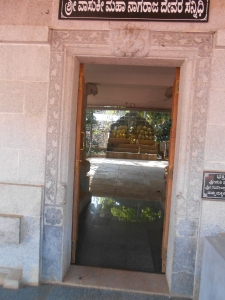 The worship of Naga, is a predominant in the Tulu Cultures. The families that are associated with the Naga’s or the Nagabana, use stone headstone to worshipped. These were formally called “Naga sthana” or ‘Nagabana” over the decade of Saffroniziation these are called as “Vasuki devasthana.”