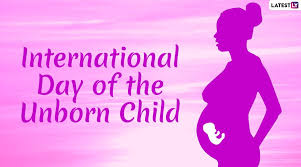 International day of the unborn child.

“I feel the greatest destroyer of peace today is ‘Abortion’, because it is a war against the child… A direct killing of the innocent child, ‘Murder’ by the mother herself… And if we can accept that a mother can kill even her own child, how can we tell other people not to kill one another? How do we persuade a woman not to have an abortion? As always, we must persuade her with love… And we remind ourselves that love means to be willing to give until it hurts…”
― Mother Teresa

With due respects to Mother Teresa this is one of the most patriarchal things to say. I agree with Jeffery Duarte when he says “There’s a difference between wanted living children and unwanted unborn children. And, if whoever wants unwanted born children to be born, then they should not make it difficult for them to be helped when people need the assistance.”
In 1999 Pope John Paul II dedicated this injunction with the feast of annunciation which occurs on the 25th of March. It is essentially to celebrate human life. People for dignity of life from the moment of conception would

Abortion is the ending of pregnancy by removal or expulsion of embryo or foetus before it survive external environment.

If this is spontaneous then it is referred to as miscarriage. By default abortion has comes to mean deliberately inducing the expulsion.

Some of the causes for spontaneous abortions are:

The debate and the discord come when the expulsion is induced. Many times the expulsion is induced if there is congenital issue diagnosed in the ultrasound, or if the mother’s mortality is threatened. This does bring up lot of ethical, sociological and metaphysical debates up the most common being the woman carries the child in her body so the choice to have the pregnancy or not should be hers. The pro-life people talking that once the foetus the mother is just a container for the foetus so she does not get the choice. Well this is something that can be debated till the cows come home.

Metaphysically speaking, a miscarriage occurs when the foetus decide it’s not ready to come out. The choice could be child’s spirit’s or the maternal spirit. Neither is wrong it is a contract that is not going through. Also there might be realigning required for the contract to be executed.

There are lot of things in this space that are beyond my understanding. I’m not judging the mother’s decision to go through the pregnancy or not that is a totally personal space between the biological contributors of the foetus.

But I definitely do wonder about the “Pro-Life people” whose arguments revolve round the sanctity of life, I think we as a species have quite much proved that we do not believe in the sanctity of life. We turn a blind eye to famine, epidemic and anything that sustains life.

From where I see it, we cannot get to call ourselves “pro-life” when killing is acceptable. We glorify destruction of environment all in the name of development. We have no respect for Environment an protection agency that ensure clean air, water, preserves biodiversity and combats climate changes that is disrupting life on the planets. In my world people don’t get awarded with the pro-life is abbreviation for respect of sanctity of life and this does not begin at conception and end with birth, what about rest of the life. What about other lives?

One Reply to “The unborn child.”