The word Bully has diverse meaning like a blustering browbeating person especially someone who is habitually cruel to others particularly some weak. It could also mean a hired ruffian. Interestingly the word began meaning as brother, friend, sweetheart.

Bullying can be a simple one on one to more complexes, with a bully having one or more lieutenants. Bullying at schools, family, workplace, home and neighbourhoods.  This bullying patterns and behaviour depends on whether the most influential male in the bullies’ life would approve of the bullying behaviour or not.

Bullies behave the way they do because

What is the victimology or what makes a person susceptible to bullying.—bullies tend to pick people who they think they can get away bullying. The ratio of being bullied is one in four in most   countries. Some major triggers seem to be

Bulling can be Physical, Emotional, or verbal. These days bullying is also cyber.

By and large the tendency is to brush off bullying as part of growing up, fun, peer bonding etc. but the impact of it can be long drawn. It affects both the predator and the victim.

The victim lands up losing interest in school, they might even suffer physical and mental injuries. Depression, anxiety, anxiety, sleep disorder, turning into loners and generally looses interest in activity there are also incidences where victims have been pushed to committing suicide and this has been labelled as Bullicide.

The kids who bully tend to have violent behaviour as well. Alcohol, drug abuse seems to follow through adolescence and adulthood.  Fights, vandalism dropping out of school, promiscuous behaviour and they are also vulnerable to sexual abuse and sexually transmitted infections. 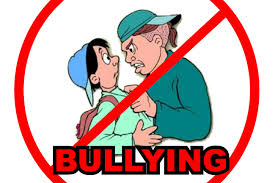 Many bullies become abusive towards their spouses and children

the semi-annual event International Stand Up to Bullying day is to take a visible public stance against bullying. This event takes place in schools, workplaces, organization. This happens on the on the last Fridays of November and the Last Friday of February.

This is an event that has been happening since February 2008 students and staff take a stand against Bullying by signing and wearing a special pink pledge shirt.

One Reply to “The Big Bully.”