My sister and I were in the Bombay local, it was just after Eid. Since my burn scars were visible I had taken to wearing the Hijaab.  Hijaab is the traditional covering for the hair and neck that is worn by Muslim women.

At Dadar, a woman entered since it was a time and day when the train was not crowded, the women decided to make conversation. She looked at me and said,”Eid Mubarak.” It didn’t do harm to reply so my sister and I greeted her back. She then said,”Oh! The Kheer that you make for Eid I really enjoy It.” it then occurred to us that she thought we were Muslims and was trying to be secular. I know it sounds bitchy but that seems to be a major attitude.

Too many people look at the Hijaab as though it has bizarre powers sewn into its microfibers. Powers that transform Muslim women into UCO’s that is the unidentified covered objects, which in turn converts the Muslim women from us to them.

The trail of the covered head, came to India with the conquering Muslims, the elite women first wore them, like copying the stars, the people then began covering head to copy the elite… the reference to this can be found in kalhana’s ragatarangini. Eventually it became part of the wardrobe, I think parallel journeys are travelled by the ubiquitous “nighties” and now the “Salwaar Kameez.” Any way February 1st is the world Hijaab Day and 116 countries participate in it. it was founded by Nazma Khan in 2013. 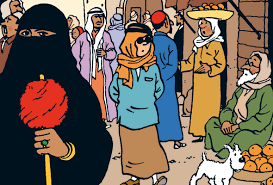 The idea is for both Muslim and non-Muslim women to wear the Hijaab for a day and experience life from the other side, that is experience the life of a Hijaabi woman. Of course people do look at it as a venture to create converts, and convert the converts to fanatics.

The Hijaab is viewed as a method of oppression to quote Yasmin Mogahed, in Reclaim Your Heart personal insights on Breaking Free from Life’s shackles —. “With my veil I put my faith on display—rather than my beauty. My value as a human is defined by my relationship with God, not by my looks. I cover the irrelevant. And when you look at me, you don’t see a body. You view me only for what I am: a servant of my Creator.
You see, as a Muslim woman, I’ve been liberated from a silent kind of bondage. I don’t answer to the slaves of God on earth. I answer to their King.”

As for feminism, its purpose isn’t to make a particular type of woman, the idea that there are inherently wrong and right types of woman  it’s so judgmental, this belief, we don’t accept  dim birds, birds that bitch, birds who stay at home and look aft kids, birds that drive the pink Nano with powered by fairy dust , birds saris, birds in burkas, birds that like to pretend that they are  Hrithik Roshan’s dream dancer partners, feminism is all of us, and feminism is that simple belief that women should be as free as men, however nuts, dim, deluded, dowdy, fat, lazy , smug they might be.

All of you feminist watch dogs, next time you are heading out of the door, pause at the mirror and make sure that what you see reflects your purpose and value. That does not mean donning a Hijaab but it probably doesn’t mean having words on your butt either.

At the end of the day, the decision of to wear a hijaab or not should be that of the individual. Western opinion on the hijaab or burkas is rather irrelevant.  It would be right that we don’t decide for any woman, what does or does not oppress them no matter how highly we think of ourselves…” coming to modesty quote –“Modesty and decency dwell in the mind, not in a burka.”
Author: Nadeem Aslam