This was written for last week’s prompt. And I promptly forgot to post it.

Udupi the temple town on the west coast of India is the home for lot of things, the famous Mitrasamaj which still maintains its no onion no garlic menu, the Udupi cuisine, the Udupi kaimagga or handlooms.

The legend of Udupi is that it was part of the land that Parashurama reclaimed from the sea. One day when Madhvacharya was on the sea shore doing his daily rituals, he saw a ship in distress. He waved with his angavastra to the sea and ship was steered safe to the shore. The owner of the ship wanted to gift Madhvaacharya with riches. Madhvaacharya refused all material wealth and asked for two slabs of Gopi chandana that lay at the bottom of the ship. The captain of the ship gave it to  him.

As Madhvaacharya was walking towards the town, one of the slabs broke and out of it emerged the idol of Balarama, which was established in the temple called vadapandeshwara. While the other came into the town of Udupi and was installed in the temple of Mukhyaprana. Madhvaacharya then invited the eight prominent villages around Udupi to invest into the temple. Thus came into to being the ashtamatta’s of Udupi.

As kids I remember it used to be the high light we were allowed to stay up all night. The movie theatres ran 24hr movies. We would escort the outgoing mattadipati and be the guard of honour during the Purapravesha of the in-coming seer.

I’m sharing pictures of the Pariyaya that took place this year with the Admar Mutta taking over the administration for the coming two years. 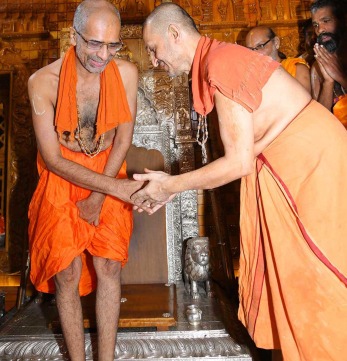 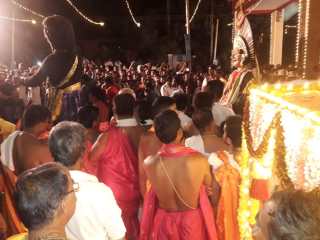 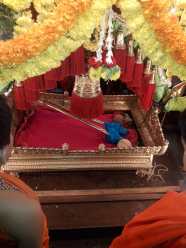